An Egg On The Face: Rabo Alleged Sex Scandal 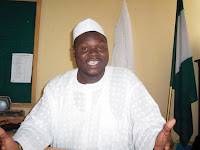 By Al-Amin Ciroma
The alleged sex scandal of the director-general, Kano State Censorship Board (KSCB), Mallam Abubakar Rabo Abdulkareem brings to mind once again the leaked explicit video of the Kannywood star, Maryam Hiyana in 2007. Hausa film practitioners suffered incarceration and a series of hurdles and impediments as a result of that scandal and since then, the relationship between the latter and the KSCB had the apples and oranges style.
However, Sunday August 22, opened yet another chapter in the history of Kannywood, an episode that marked the end of an era and the beginning of another. The Kano residents were dismayed by what they perceived as alarming news. The contention went down to affect Rabo’s amour propre, who was formerly busy recording his ‘successful strides’ in the bid to sanitise the film industry as well go about punishing those found wanting by his team. It would be recalled that sometime last year, Kano filmmakers alleged that Malam Abdulkareem went on air in one of the Kano State’s independent radio stations and accused them of muddled behaviours. He alleged that the Hausa filmmakers were wayward. Not only that, the KSCB boss extended his gunboat diplomacy to other states across the north, calling them to emulate his ‘good governance.’ In Kaduna for example, the DG in a live programme at an independent television station, accused the filmmakers of producing pornographic films.
The frenzied matter led to swords clashing between the latter and former in court. Moreover, with this allegation, a lot of unanswered questions emerged from all corners doubt the DG’s uprightness and veracity. They opined that there is no point throwing stones when one lives in a glass house. His sympathisers on the other hand view it as a set-up against the Kannywood warlord. Following this development, the Motion Pictures Practitioners Association of Nigeria (MOPPAN), the umbrella body of Hausa filmmakers, issued their stand on the matter, signed by its national president, Malam Sani Mu’azu. They called on the Kano State Governor, Malam Ibrahim Shekarau to be on top of the matter and act accordingly.

The MOPPAN Story...
We are aghast, as well as dismayed, by the frantic attempts of the Director-General, Kano State Censorship Board, Mallam Abubakar Rabo Abdulkareem, and some collaborators in the Kano State Government and elsewhere to trivialise the serious sex scandal that broke out concerning him last week. We have no iota of doubt that these attempts are meant to discourage any further open discussion on the matter, portray it as an unimportant distraction in the issues of governance in the state, and then sweep it under the carpet.
But Rabo's self-imposed position as a vanguard of morality not only in the Hausa movie industry but also in the Kano society in general makes it imperative to launch a full inquiry into what really transpired on that night of Sunday, 22nd August, 2010. Rabo and the government he represents should not imagine that covering up this matter would be in their best interest because 1) a huge chunk of the good people of Kano State and indeed the whole North are now learning towards to believing the stories around the incident as they presently circulate, and 2) doing so would cast a big shadow of doubt over the Shekarau government's purported entrenchment of Shariah law in the state. Investigating the scandal however, would bring out the truth of what actually happened. It could clear Rabo of all charges/suspicions or expose him as a hypocrite, someone who engages in secret philandering with girls young enough to be his daughters and therefore ill-fit to hold the sensitive position of DG, KSCB.
The story going a round in the public domain, as published by the Sunday Trust of 29th August and Leadership of August 30th, 2010, is that Rabo was discovered by patrolling policemen in the Sharada quarters of Kano City, in his parked car behind a building, off the road in the dark. It was around 10 p.m. When the police approached, he switched on the ignition his car and drove off in a devil-may-care speed. The patrol car pursued him. In his blind haste, he knocked down a pedestrian seriously injuring him. The pedestrian was later discovered to be a staff member of the Kano State History and Culture Bureau. He is still on admission at the Nassarawa Hospital. Rabo was eventually apprehended by commercial motorcyclists, who had folowed in hot pursuit when he refused to stop after knocking down the pedestrian. A teenage girl, who was thoroughly frightened, was found in the car; her underwear was said to have been found in the back seat of the car.
Rabo was eventually taken by the patrolling policemen to the Sharada Divisional Police Station where he was questioned. However, he was allowed to leave with his badly damaged car and the girl that same night by the Divisional Police Officer in strange circumstances.
Both Rabo and the police authorities in Kano have confirmed this incident in their press interviews. What is being contested is what Rabo and the girl were doing at that forlorn place and in that unholy hour. The story being spread is that Rabo was having a carnal knowledge of the girl as many unscrupulous men tend to do under similar circumstances. Rabo has however, denied any wrongdoing, saying that the girl was the daughter of his late elder brother and that she had accompanied him to escort some relatives who had broken their fast at his house.
The government of His Excellency Governor Ibrahim Shekarau must investigate the incident in order to reassure the people of Kano about its sincerity on the implementation of its Shariah programme, about which there are millions of skeptics. And while doing so, Rabo should be ordered to go on suspension pending the outcome of the investigation.
The Motion Picture Practitioners' Association of Nigeria (MOPPAN) hereby proposes that a powerful, independent Committee of Inquiry be set up by the Kano State Government to investigate the various claims in this saga. Some of the questions the Committee should investigate include, but not limited to, the following:
•Who exactly was the girl in Rabo's car on that fateful night? Was it really his niece as he claimed in his press interviews or a different person altogether? How old was she? The girl should be interviewed by the Committee;

•Did Rabo really host his relatives to a Ramadan-breaking meal (Iftar)? Who were they? They should be made to appear before the Committee;

•Why didn't Rabo go with male member(s) of his family when escorting the said in-laws instead of going with the said teenager if at all she exists and was the one that went with him?

• If indeed the girl in question is his niece, is it true that he and she were having a secret affair as is being rumoured?

•What exactly was Rabo doing with the girl at around 10p.m. in a secluded place off the main road?

•Why did Rabo drive off even though the police siren was said to have been blaring, urging him to stop? And why did he run away even after knocking down the unfortunate pedestrian?

•Who were the policemen that arrested him and took him to the police station in Hotoro?

•Exactly what did Rabo say in his first written statement to the police?

•Why did the Divisional Police Officer (DPO), Hotoro, release Rabo and the girl together with the damaged car, when investigations were just commencing and Rabo's hit-and-run victim had just been taken to the hospital in a critical condition? Was that a normal police procedure?

•Why did Rabo virtually flee to Saudi Arabia, ostensibly to perform the lesser Hajj (Umrah) a day or two after almost killing a citizen and while having a sex scandal on his hands? Why didn't he wait to clear himself of all charges and ensure that the victim of his hit-and-run accident was in a better condition of health?

•Did Rabo contribute any money to the family of his hit-and-run victim for medication, which must cost a lot?

•Why did some Kano State government officials try to cover up the incident by misinforming the general public that there was no girl in Rabo's car during the incident? Obviously, they had no idea that Rabo had already confirmed that there was indeed a girl in the car. They were also said to have been urging journalists in the state and elsewhere not to break the story and or allow further discussion on it;

•Rabo had claimed that he was aware of certain meetings held for two weeks by some film industry stakeholders or PDP stalwarts with the aim of eliminating him. This serious allegation should be investigated not only by the investigative committee but also by the security agencies; Rabo must tell them where and when those meetings took place, as well as the names of those in attendance;

•Rabo had told the press that officials of the opposition PDP in Kano were responsible for his present ordeal. He must tell the Committee how this was possible and the names of those involved.
Finally, we wish to note that Rabo has since become a liability to the government of Mallam Ibrahim Shekarau. He has attracted more negative perception to the government than any goodwill. A more dynamic and people-oriented regime would have relieved him of his post; more so as he has failed woefully in discharging his responsibilities. The good people of Kano State and the nation at large and wonder just why Governor Shekarau has been keeping him in that office even though he has contributed nothing in the direction of sanitising the industry. He has only succeeded in causing more unemployment of the youths that he prevents from earning their legitimate livelihood, encouraged the production of movies that are not censored yet are in full circulation all over Kano, and helped heat up the society.
This Rabo sex scandal is a litmus test for His Excellency Mallam Ibrahim Shekarau's candidature for the presidency of Nigeria. Shekarau, who has announced his bid to run for president under his party the ANPP; he should begin to show that he would be a responsive and responsible national leader when elected by not helping some elements in his present government to cover up this scandal. Doing so would question his motivation and commitment to the enthronement of a decent society in Nigeria.
Posted by Al-Amin Ciroma at 7:03 AM